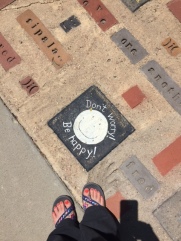 If we were having coffee, I would have to apologize. The shop is closed, after all…it is past 10 pm for cryingoutloud. We would settle on my screened front porch with DECAF…and perhaps have it over ice (it is still hot outside…and the house is unbearably stuffy). Then, I would ask you a rather curious question. I am taking a poll, you see….

If you could change one thing, just one about yourself….(and it can NOT be body-related..I know, I know, but let’s not go there..)….what would it be? What little gift would you give yourself? And why?…(I promise, this isn’t going in one of my books)…

If the magical Genie-of-all-Wishes landed on my table, and twirled his glitter wand around the room…what would I desire?

If we were having coffee, I would tell you that when I was a kid, it was easy….money. When I became a teenager, it was money. When I grew older, and had my first inkling of being a parent…it was …money. Unlimited, no less. I know it sounds quite selfish, materialistic, even crass….but just think of all one could do with an unlimited source of fulfillment in the bank account? OH, the lists I made…

But now….well, now I am grown up, QUITE a bit older, perhaps a tad wiser….and I would request for HUMOR. Yep, a good dose of humor. The ability to deliver perfect timing in all jokes (I forget the punchline), the quickness of satirical wit, the shocking snap of the irreverent….ah, what a gift. To be able to crack awkward silence with charming laughter, to be able to lighten everyone’s day with a funny observation, to help heal all manner of sadness, lift a dreary moment, find the perfection in the silliest of imperfections…to make my daughter snort ice tea out her nose with a fast joke…..I would cherish that ability.

I have sadly decided I am quite lacking in that  department, although I succeed often as the “straight-guy” sidekick. This most commonly occurs without my knowledge and thus, is not as satisfactory a feeling even if does seem to elicit laughter.

Performing in community theater taught me one thing. Well, more than one~ don’t try to jump out a fake window and don’t eat face paint. (Don’t ask). But other than that little ditty, it underscored a very strong truth. Comedy is HARD. Drama…well, that is doable…emotion, lots of emotion. I got that down. Buckets of emotion. Yep, can do. Tell me when. But comedy….oh, hellsbells.

I admire those quick-witted, goofy, wild and sassy comedians…especially those in families. I love a spirited joke-fest, a tug o’war with feisty snappy comebacks, the ribald tradeoffs of sly one-liners. Laughter is a tonic, a super-powered healing tonic. And we need more of it. So, I put in my request, Genie-of-grownup wishes….

If we were having coffee, the wine would be open by now. A plate of cheese and strawberries would sit between us and the lavender candles would be lit. The moon is almost full, I would say….What’s your wish?

One thought on “If we were having Coffee~”

The Depth of Now

"She Believed She Could So She Did"

Motivated to LOSE Weight
Exploring the epiphany
Write your Destiny

Smart Diet
The World in Black and White

Down the rabbit hole...I am strong enough to remain in this until God tells me what I'm here for. This is my testimony. (You don't have to like it.)

Creating a life filled with happiness and inspiration- whatever your budget